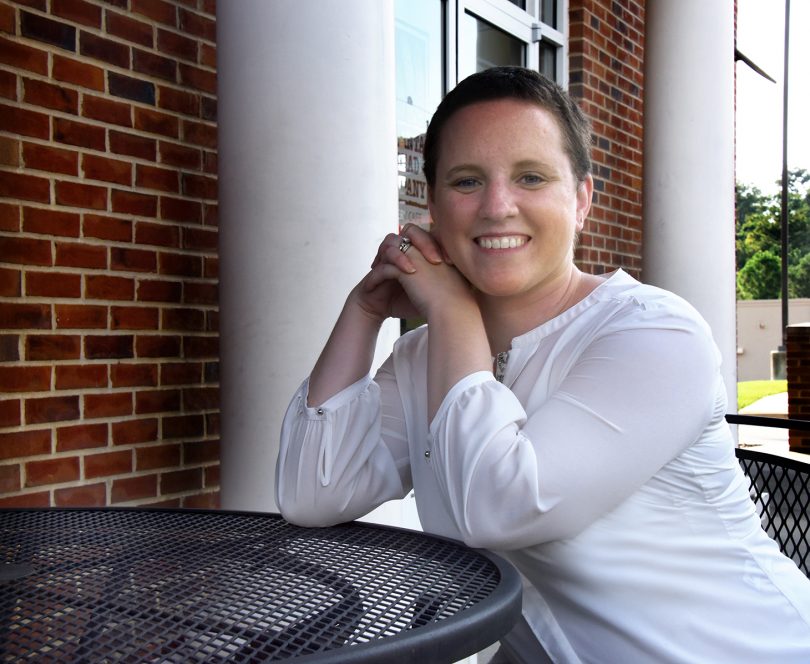 Handwriting represents a person’s identity on paper, as no two people form their letters exactly the same. But what happens when one’s handwriting no longer looks like their own? This happened to Megan Bell and served as a sign that something wasn’t right.

About four years ago, when her colleagues took notice, she attributed it to being tired or not writing as much because of her computer-based job. But her right leg also shook a lot. The symptoms started to add up.

“My co-workers would notice,” she said, “but I didn’t want them feeling sorry for me.”

It was these signs that led her to see a physician, who ran tests and knew right away that Bell, now 29, was suffering from Parkinson’s disease, a brain disorder marked by motor symptoms and non-motor symptoms caused by the brain’s stopping to produce a neurotransmitter called dopamine.

A mind set on solutions

With her mind set on finding a long-term solution for managing the symptoms, about a year after her search began, she finally found Dr. Julie Kurek, a neurologist at Augusta University Neurosciences Center of Excellence. Kurek was proactive in talking to Bell about her options, one of which involved a form of brain surgery called deep brain stimulation (DBS).

“My initial reaction was to ask, ‘How much hair are they going to shave off?'” Bell said. “When it sunk in, hearing ‘brain surgery’ was scary, but my excitement to start the process overpowered the nervousness I felt.”

DBS is a surgical procedure used to treat neurological symptoms such as tremor, rigidity, stiffness, slowed movement and walking problems by blocking electrical signals from specific areas in the brain.

These were the words that Bell confidently announced to Kurek after deciding that the pros of DBS heavily outweighed the cons. At the top of her list of pros? Being able to enjoy playing with and chasing after her 2-year-old daughter with her husband of four years.

“Before the surgery, I felt weak — like I was in cement,” Bell said. “I felt like dead weight, and I couldn’t do anything.”

Dr. Cole A. Giller, a neurosurgeon working with Kurek in the DBS program, implanted Bell’s DBS device. Giller serves as the director of functional and stereotactic neurosurgery at Augusta University Neurosciences Center of Excellence, and he is the only surgeon who performs this procedure in the Augusta area.

“DBS dramatically improved Bell’s symptoms,” Giller said, “so the large doses of anti-Parkinson’s medication she required before the surgery were no longer needed. As a result, the severe, unwanted movements that she experienced as a side effect of the medication, called dyskinesia, completely vanished.”

This was Bell’s and Kurek’s goal for DBS.

“I feel great,” Bell said. “I feel like I can live again. I’m proof that there are options out there that can work, and I want people to know that they, too, can press on to find them.”

As Bell looks ahead to the future, she looks forward to building a house and growing her family, all while living free of some of the most troubling symptoms of Parkinson’s disease.

Are you or a loved one looking for Parkinson’s disease solutions?

Call us today at 706-721-4581, or visit augustahealth.org/neuro to learn about our neurosciences services and providers.