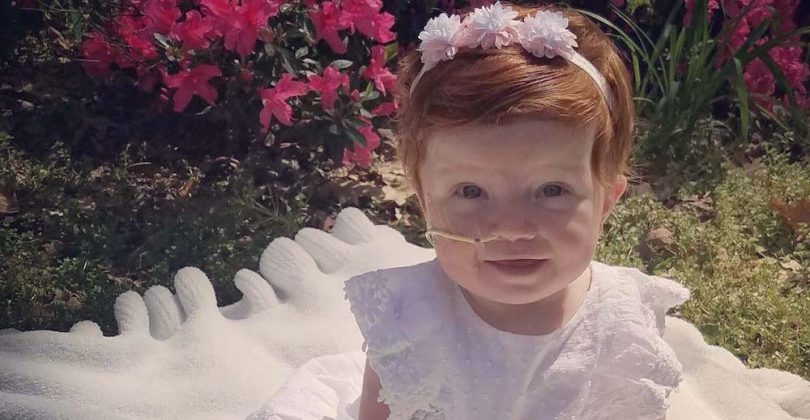 Daughter Vivienne (Vivi) Kate was an unexpected surprise for Haley and Jamie Spell, who already had a 3-year-old son and a 2-year-old daughter. Their only thoughts were focused on preparing for having three little ones at home, all either in or barely out of diapers.

So the shadow that an ultrasound tech found in the baby’s heart while Haley was about seven months pregnant came as a complete shock. “Nobody was able to pinpoint the exact issue at that point, but even before we went to the high-risk OB, I had a suspicion that something was wrong,” said Haley. “It was just a gut mom feeling. Then after they finished doing the echocardiogram and when the pediatric cardiologist walked in, I could just tell by his face.”

Vivi Kate was diagnosed with hypoplastic left heart syndrome, a heart defect in which the left side of th 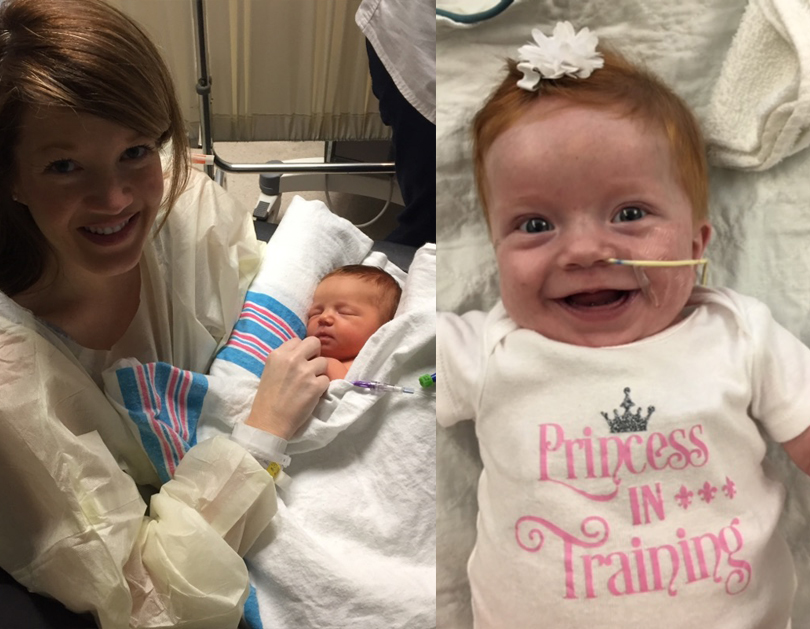 e heart is severely underdeveloped. And it’s both rare and complicated to treat: Congenital heart defects are present in only about 1 percent of live births—and within that 1 percent, only about 5 to 9 percent are due to HLHS.

“I broke down,” said Haley. “Then you have to get yourself together.”

The Spells did all the research they could—“we read a lot about it, and it was very scary”—then toured the neonatal and pediatric intensive care units, where Vivi Kate would be transferred as soon as she was born. They also met Dr. Anastasios Polimenakos, the pediatric cardiothoracic surgeon at the Children’s Hospital of Georgia, and nurse practitioner Lauren Mathis. “That’s when we laid out a plan for surgery.”

Vivi Kate would undergo the first of three procedures to repair her heart roughly 10 days after she was born. The first surgery, a Norwood procedure, would place a shunt in her tiny heart and build essentially a new aorta to provide blood flow to the body. The second surgery would happen when she was six months old, a bi-directional Glenn operation to remove the shunt and reconstruct the heart so that half of the body’s deoxygenated blood travels directly to the lungs. At around 2, she would have the final procedure, a Fontan operation, which would deliver all deoxygenated blood to the lungs.

Vivi Kate was born by Caesarean section on May 8. “It was a Monday morning, and they immediately took her to the NICU,” said Haley, who was able to cuddle her daughter just briefly right after birth. It would be another eight hours before her epidural wore off so she could get down to the NICU—“but that was another thing that made us want to stay right here at the Children’s Hospital of Georgia.” The children’s hospital is the only center in the state where both new mothers and babies requiring neonatal care are cared for under the same roof, allowing families to stay together (in other cities, children’s hospitals are typically standalone facilities, located several miles away).

“The funny thing is, she looked like a completely normal baby,” Haley recalled. “Her coloring was great, her oxygen saturations were almost 100. She was beautiful.” 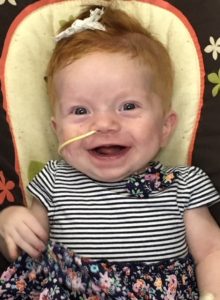 While her surgery was being planned, Vivi Kate was receiving a medication called prostaglandin to help keep the ductus arteriosis, a blood vessel used for fetal blood circulation that typically closes after birth, open to ensure blood would flow to her lungs.

Ten days later, Vivi Kate underwent the Norwood procedure. “She did well after surgery,” said Haley, who was already preparing to take her little girl home about four days later. “I had been up there all day and came home at 9 p.m. to take a shower. Thirty minutes later, one of the cardiologists called and said she’d coded.”

The baby would be on ECMO, a heart/lung bypass machine, for five days. Those days, said Haley, were terrifying. “But I do remember that everyone was amazing. The nurses, the doctors, the staff—if they hadn’t been how they were, I don’t think I would have done as well as I did or have gotten through it. They were so reassuring, but at the same time, they told us that she could not make it. It was just unreal.”

But Vivi Kate, who was born with red hair, was a fighter. Although she had to stay in the hospital for three

more weeks, it was a happy time when she was finally able to come home.

Bringing a newborn home is always challenging—and even more so when a medical condition is involved. The Spells had to check their daughter’s oxygen saturation and heart rate three times a day—“I checked it 20 times a day at first!” said Haley with a laugh—and recorded how much she ate, when she urinated and when she had a bowel movement.

But then there were the joys. Although Vivi Kate was being fed by an NG tube that led directly to her stomach, Haley decided to try to breastfeed one day when her daughter was fussing and wouldn’t settle. To her surprise and joy, Vivi Kate latched on right away and Haley’s milk quickly came in. “It was a blessing from God,” she said.

The second surgery, which happened in October, was a breeze compared to the first. Vivi Kate was hospitalized only 11 days, and when she came home, said Haley, “she was a completely different baby. I could tell she felt so much better already—extra oxygen would probably make anyone feel better. But she was happier, she could do more and she started almost sitting up on her own!”

Haley credits it again to that red hair. “She’s fiery and feisty—she knows what she wants,” she said with a laugh.

But she gives all the kudos to the team at the Children’s Hospital of Georgia. “What an amazing PICU staff,” she said. “They are like second family to us. We can’t say enough good things about them. I just cry thinking about how they got me through all of that and how they kept checking on Vivi once we got home. And Dr. P—our course, he’s our hero, and Lauren, our nurse practitioner. They’re our family.”