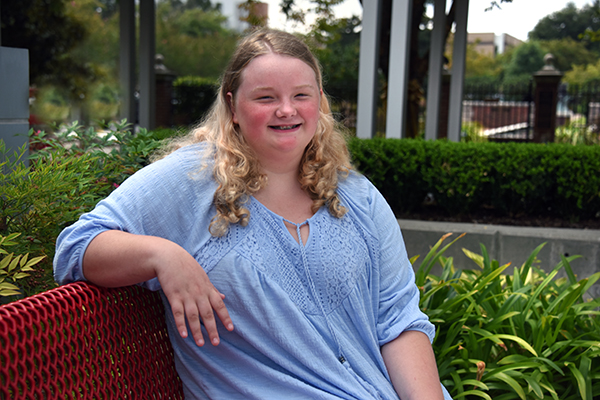 “My daughter calls me a nosy mama,” said Meg Silvery with a laugh. “I say, ‘I’ll be a nosy mama if it means I find what I find and it saves your life.’”

It was Christmas two years ago when Meg happened to glance over at her 12-year-old daughter, Sydnie—“and the side of her neck was really, really swollen.”

A transplant surgery assistant at Augusta University Health, Meg clicked into medical mode: “Did you sleep funny? Does your throat hurt?” Then she felt her daughter’s neck, underarms and chest, and there it was: a lump, just the size of a dime.

For the previous two years, Sydnie had been fighting infection after infection—“She was almost on an antibiotic every week.” Her pediatrician suggested that this latest change was just a swollen lymph node—a result of all the infections—but Meg wasn’t happy with that answer. She took Sydnie’s lab results to one of her surgeons and asked if they looked OK.

The answer was no.

“Her white blood counts were way too high,” said Meg. “Then I told him about the lump, and how she was sleeping all the time, always sweating, everything, and he immediately called Dr. Howell’s office.”

Dr. Charles Howell, then chief of pediatric surgery at the Children’s Hospital of Georgia, called Meg to come to his office. Sydnie was then scheduled for an appointment with pediatric surgeon Dr. Walter Pipkin the very next day.

An X-ray was inconclusive, so Dr. Pipkin ordered a CT scan with contrast. When Meg and her husband, Melvin, entered the room to view the findings, “We both could just see masses and masses.” The lump that Meg had found was just one tiny mass among many that were crowding inside Sydnie’s chest, pressing on her heart and her airway.

And all Meg could think about were the past two years and all the infections and illnesses, and her bright, wild daughter, who had started withdrawing from friends and activities, because she was just too tired.

It would turn out to be Hodgkin’s lymphoma, stage 2b, both early and treatable. When Meg told her daughter, they both cried, then there was a flash of the old Syndie: “Will I lose my hair? Then I want to dye it funky colors. And when I get into the hospital, I want crazy pajamas.”

The first step was surgery to perform a bone marrow biopsy as well as to insert a port for chemotherapy. Sydnie would receive chemo over a six-month schedule: inpatient chemo for a week, followed by a one-day break, then a day of outpatient chemo. The routine would repeat every three weeks, with 10 days of radiation planned following chemotherapy.

While the treatments weren’t fun—Sydnie’s first experience receiving chemo through her port was incredibly painful—Meg and Melvin planned it so that one of them or one of Sydnie’s older sisters, Cheyenne or Hailee, was always with her while she was in the hospital. Because the family lives about 45 minutes away, Meg actually slept in Sydnie’s room and then got up to walk to the next building for work in the morning, while Melvin, who worked nights, came in to stay with their daughter.

“They treated her like a queen here,” said Meg. Sydnie had the strong support of her family but was bullied badly by classmates, so there was no friend support system. “Child life was amazing,”—the team of specialists whose job is to help make a hospital stay a little more fun. “They would come and talk to her when they saw she was having a bad day, and if she didn’t want to hang out with the other kids, one of them would come hang out with her in her room.”

But slowly, Sydnie started to make friends with other children during the daylong outpatient chemo treatments. And as the treatments began to work, she started to come out of her shell.

“After the second round of chemotherapy, they took her for scans, and there was a huge difference,” said Meg. The tumors were shrinking—and Sydnie’s case just kept on improving after that. Her pediatric oncologist, Dr. Colleen McDonough, told the family that if all continued to go well, Sydnie might not need any radiation. “That was our goal,” said Meg, “and we made it.” Not only that, but she only needed four months of chemotherapy, not six.

Sydnie was officially declared in remission on August 16, 2016. She still goes back every few months for followups, but her hair has grown back, long, a little darker and very curly, which can aggravate the girl with the formerly stick-straight hair. Her most favorite thing is Camp Rainbow, the Children’s Hospital of Georgia’s annual summer camp for kids diagnosed with cancer. Sydnie can go until she turns 18, and after that, she wants to still go as a counselor.

“She also wants to be a doctor, but she can’t stand the sight of blood,” said Meg with a laugh. “But whatever she wants to do, she can do it.”

And she would never recommend any other place to any other parent. Before this, Meg took Sydnie to a community physician because it was more convenient to their home and school. Now, even though it’s a 45-minute drive one way for a doctor’s appointment, “it’s worth it,” she said. “I will never, ever take her anywhere else again…It’s amazing here. I honestly believe if we were sent somewhere else, we would not have had the outcome we had.”

To learn about our cancer specialists and services, visit augustahealth.org/cancer.