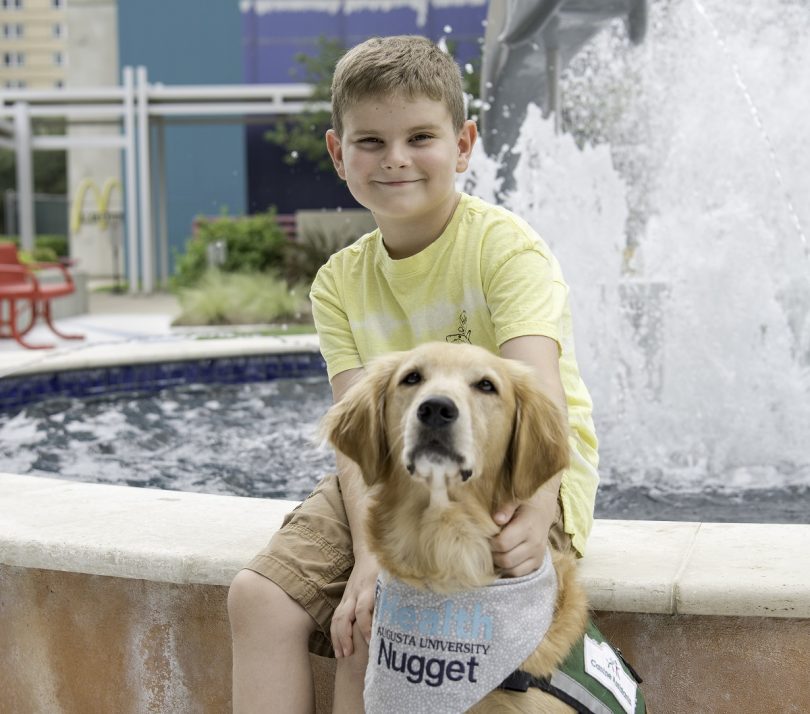 As a baby, Lucas was one who never ran out of energy.

So when he got a fever, his mom, Danielle, didn’t worry too much. After all, it was flu season, and her then-six-year-old was still running around like he always did.

But then one week went by. His doctor checked, and sent him home with an antibiotic for an ear infection.

Then another week of fever. Tests came back negative for the flu, and his doctor sent him home again.

Then another week. By this time, Danielle was starting to worry. Her always-running 6-year-old was sleeping all the time, his fever was starting to spike and he would wake up in the middle of the night to throw up.

Lucas was with Danielle at work one day when one of her co-workers asked, “Lucas, are you all right? You look a little yellow.”

Without answers from her doctor, Danielle called her mother-in-law, Rhonda, a nurse at the downtown VA. “Come by and let me take a look at him,” she said.

She took one look and said, “I think we need to take him across the street to the children’s hospital.”

In the ER of the Children’s Hospital of Georgia, Danielle and Rhonda waited as doctor after doctor came into Lucas’ room. At one point, Rhonda got up to leave because she had to go to work early the next morning. But she came back with tears in her eyes, and a moment later, one of the doctors asked Danielle to step into another room.

He sat her down, and said quietly, “We think Lucas may have leukemia.”

They are words that still make Danielle break down into tears. “I was in denial,” she said. “But they confirmed it the next day after they admitted us.”

By this time, Danielle’s husband, Jerrett, had raced home from Myrtle Beach, where he had been working. Tears flowed again. “Jerrett is so sweet and kind, and Lucas is just like him,” said Danielle. “They’re thick as thieves, and he was just like, ‘That’s my kid. That’s my kid.’”

And Lucas, her sweet, energetic child? “He just rolled with it,” said Danielle. “Wetalked to him, and for him, it was no big deal. He had this.”

Ironically, the “good” news was that Lucas was diagnosed with B-cell acute lymphoblastic leukemia, which is the most common type of leukemia, with about 98 percent of children going into remission after just weeks of treatment, and 90 percent cured.

With family to help care for Makayla, then 7, and Logan, then 2, Danielle and Jerrett were able to be with Lucas as he began his journey fighting cancer.

That first month, Lucas received chemotherapy at day 1, day 15, day 21 and day 29,. A spinal tap to check his lymphoblasts—the abnormal cells that are leukemia—found that they were down, enough that his doctors could classify Lucas at standard risk.

Lucas was officially in remission—but not that his journey was over. After that first month, he began eight months of intense chemotherapy, which entailed multiple spinal taps, weekly hospital visits with chemo administered via port, and a few hospital stays.

Now, he’s in maintenance, which he will stay in until 2021, taking  daily chemotherapy pills and coming into clinic for chemotherapy every month, too.

Before the word cancer entered their lives, Danielle and Jerrett were living with their family in Illinois, two hours away from a children’s hospital. Today they are only 20 minutes away.

“The staff at the Children’s Hospital of Georgia—the child life specialists; the great nurses; the amazing doctors; honestly anyone we come in contact with—they all listen, introduce us to other families going through this, and most of all, just make sure that Lucas is happy. That helps so much,” said Danielle. “Just having each other too—our whole family, together. That’s kept us strong.